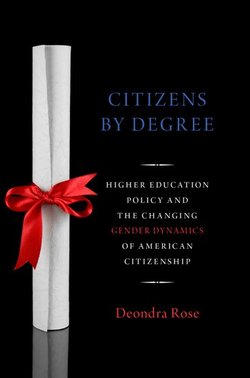 Since the mid-twentieth century, the United States has seen a striking shift in the gender dynamics of higher educational attainment as women have come to earn college degrees at higher rates than men. Women have also made significant strides in terms of socioeconomic status and political engagement. What explains the progress that American women have made since the 1960s? While many point to the feminist movement as the critical turning point, this book makes the case that women's movement toward first class citizenship has been shaped not only by important societal changes, but also by the actions of lawmakers who used a combination of redistributive and regulatory higher education policies to enhance women's incorporation into their roles as American citizens. Examining the development and impact of the National Defense Education Act of 1958, the Higher Education Act of 1965, and Title IX of the 1972 Education Amendments, this book argues that higher education policies represent a crucial-though largely overlooked-factor shaping the progress that women have made. By significantly expanding women's access to college, they helped to pave the way for women to surpass men as the recipients of bachelor's degrees, while also empowering them to become more economically independent, socially integrated, politically engaged members of the American citizenry. In addition to helping to bring into greater focus our understanding of how Southern Democrats shaped U.S. social policy development during the mid-twentieth century, this analysis recognizes federal higher education policy as an indispensable component of the American welfare state.

"This book keenly demonstrates the value of cross disciplinary analysis. Rose carefully explores the history of three legislative developments while pushing historians to recognize their unintentional--though hugely significant--benefits to women. In this, she offers a new conception of how gender, higher education, and citizenship interact."
-Linda Eisenmann, Wheaton College, Massachusetts

"Over the past half century, women have gone from the margins to the center of U.S. higher education. With empirical rigor and historical imagination, Deondra Rose's landmark book explains how this happened - and highlights the centrality of federal government policies in opening opportunities vital to female advancement in both the economy and civic life."
- Theda Skocpol, Victor S. Thomas Professor of Government and Sociology, Harvard University


"Deondra Rose has written a powerful and timely book, as vital for public discourse as for scholarship in her field. In an age of cynicism about what governments can do, Rose shows us how public policies can expand opportunity, deepen equality, and enrich citizenship. Citizens by Degree is the best study to date of how changes in funding and regulation paved the way for women to make remarkable advances in higher education and American civic life. Equally important, it is a sharp reminder that inequality and marginalization last only so long as we accept them, and that the policy choices we embrace transform the society we live in."
-- Joe Soss, Cowles Professor for the Study of Pubic Service, University of Minnesota